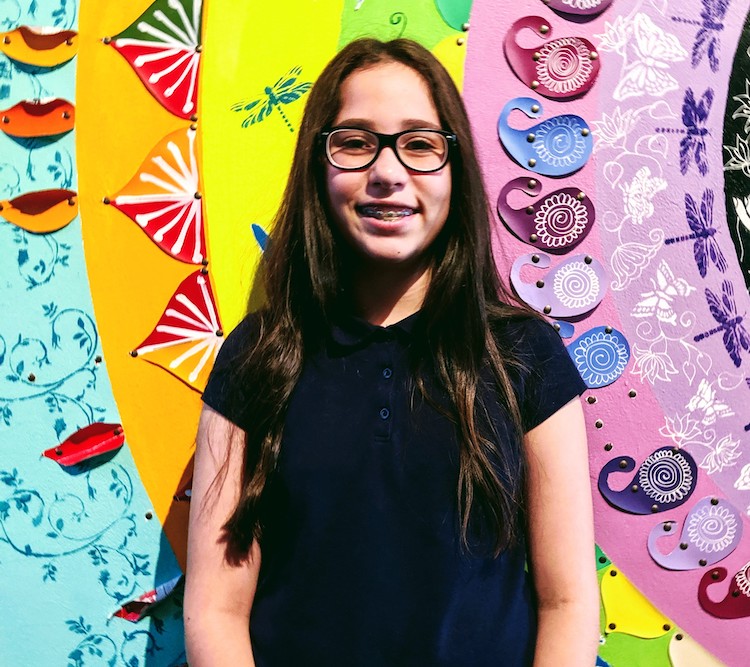 Andrea Reyes is an 11-year-old student at Renzulli Academy in Hartford, Connecticut. Andrea is a passionate lover of music, especially musical theater, as well as an avid reader, a history enthusiast, and an aspiring forensic scientist.

Andrea has played the flute for four years, and is a member of the Funky Dawgz Brass Band at Charter Oak Cultural Center. She also loves to sing and recently joined Charter Oak's Vocal Ensemble. Right before our interview, she performed a stirring solo rendition of "Requiem" from the Broadway musical Dear Evan Hansen.

"My favorite song is 'Requiem,' the song I sang upstairs," she explained. "I don't know why it's my favorite. It's just a very sad song."

Some of her other favorite musicals include Heathers and the hip hop musical Hamilton, a Broadway show about the American Revolution and the life of founding father Alexander Hamilton. She says Hamilton is largely responsible for her love of musicals: "I listened to the fifth song on the album, and then my dad got hooked on it. And then it was just played all over our house."

Andrea's favorite author is J.K. Rowling, and she says all of the Hogwarts Houses in the Harry Potter series are definitely represented in her family. "I'm a Hufflepuff. My sister's a Slytherin. And then my dad is a Gryffindor and my mom is a Ravenclaw, so we've got all four," she explained. "And then my older brother is a Hufflepuff and my older sister is a Slytherin."

In addition to reading, Andrea also has a strong interest in science, and hopes to grow up to be a forensic scientist. She says her mother helped inspire her interest in the subject: "My mom said when she was younger she wanted to be a forensic scientist, and I didn't know what that was. So I asked her, and we watched Forensic Files together and I got hooked. My mom loves Forensic Files. So whenever she watches it I sit down to watch it."

Andrea is eagerly waiting for the chance to study science in more depth, and can't wait until she gets to practice dissection in school. "I'm waiting for dissection. We might do dissection this year in project Oceanology," she said. "Last year we went to Nature's Classroom and I didn't get to do dissection. They got to dissect a cow eye! It's the closest thing to a human eye, so we could see basically what's in a human eye. That was my first choice, but everyone else wanted dissection. So I got fishing. I don't know why I chose that. We didn't even catch anything. The only thing we caught was a stick!"

In addition to science, Andrea also loves social studies. She says Hamilton again has a large role to play in her love of history, and she can't wait to put the knowledge she gained from the musical to work in the classroom.

"My teacher, once we get to eighth grade, she'll actually incorporate Hamilton into history. So like in 'You'll Be Back,' (a Hamilton song sung by King George III) she asked, 'Who is he talking about?' and he's talking about America," she said. "I'm not in the eighth grade yet. I've just got one more year. I'm so excited for eighth grade social studies!"