It's Tom, Executive Director of SpreadMusicNow. We're back with our third installment of the Music Empowers blog. Over the last two installments, I revealed the Music Empowers brand and direction we are headed as an organization, and told you about my own empowerment through music. Today, we are honored and thrilled to bring you the thoughts of Ani DiFranco, our first guest writer.

In my mind, Ani DiFranco embodies the idea of empowerment through music, and of the power of music to empower a cause. For readers who are not familiar with her art, her cultural impact or who she is, Ani is a folk-rock and alternative rock musician who has released more than 20 albums through her own record label, Righteous Babe. Her songs often cover contemporary social issues, and she has lent herself and her music to many social and political movements.

As Ani is an iconic example of the Music Empowers theme, we were ecstatic that she responded to our request to write a guest post with a heartfelt blog about Roots of Music. Roots of Music is an intense music program based in New Orleans that empowers the youth in the city through music education, academic support, and mentorship. Ani serves as a member of their Board of Directors, and Roots of Music is part of the SpreadMusicNow family as well. We have partnered with them to provide funding for their program as part of our mission, as they are an excellent example of the kind of community initiative that is transforming lives through music education and mentorship.

The Roots of Music

"Music is, if nothing else, the medicine which heals us, the key which frees us, the food which sustains." 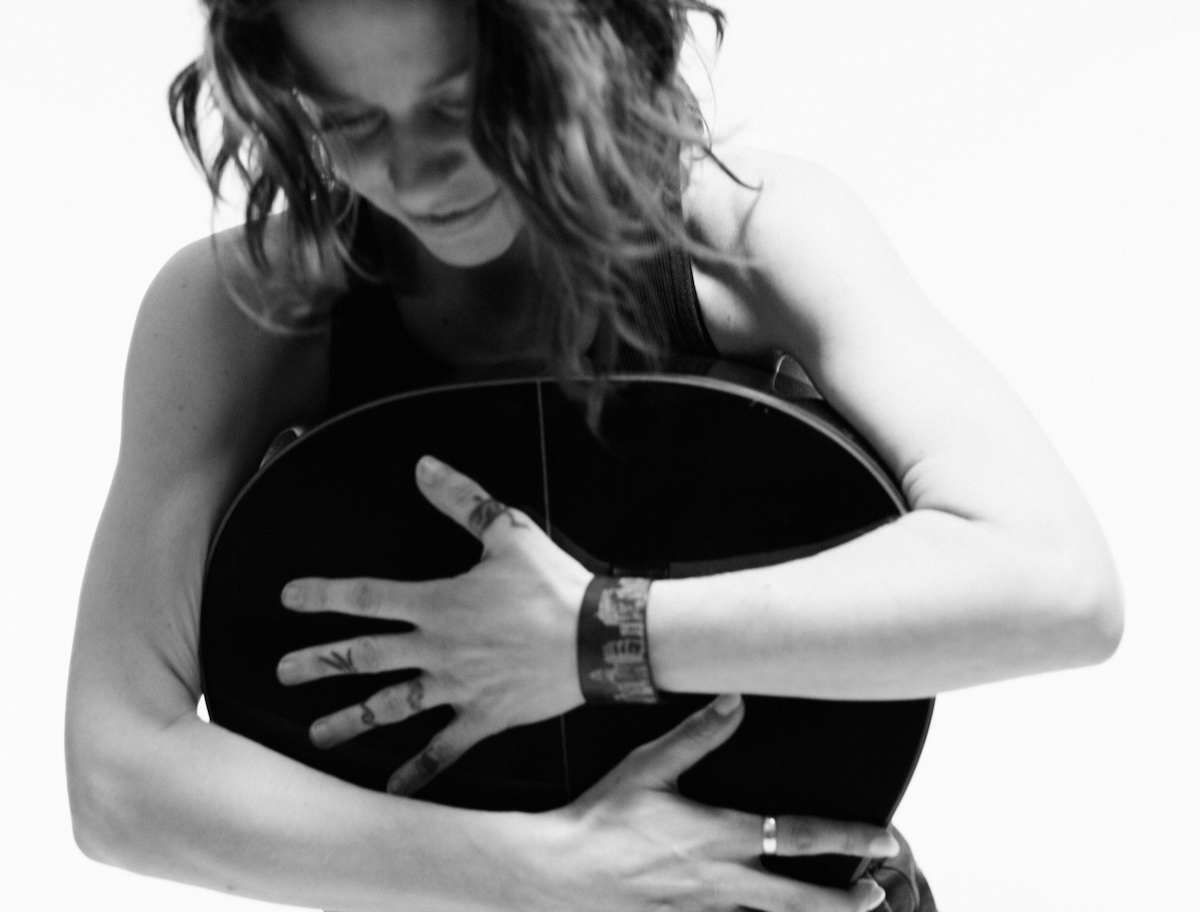 I love living in the Marigny neighborhood of New Orleans. The riverboat calliope is hooting and tooting on the breeze on steamy afternoons and at night, I can hear the lonely call of freight trains as they roll slowly down Press Street to the docks. The train horns echo easily along damp cobblestones to my door and slip into my dreams. When I step out on my front porch in the morning, I might be visited by the aroma of PJ's coffee being roasted down by the river and I might elect to just sit there for a while on my swing, before the heat swells, and take in the endless stream of passer-byes. My daughter can sit out there all day. Curious and curious-looking people, out-there people, soulful people, drunk people, singing people, people with trombones, all go by. My neighbor, two doors down, plays his piano in expansive gushes in the afternoon and churning cicadas accompany his muffled sonatas from the branches of the surrounding oak trees. I am glad that, like the rest of us, my neighbor's walls are thin. Chances are, he can see daylight through his floorboards.

The fact that New Orleans is a marvelous place is known and appreciated by people all over the world so I know I'm not saying anything new here. I just want to take a moment to honor the deep wellspring of magic that lies bubbling underneath New Orleans' picturesque surface. This is a city which doesn't just "give good day off" (as we like to say on tour) but, seemingly with ease, synthesizes moments so poetic as to make you believe in poetry all over again. As a songwriter, I feel doubly blessed to live here, like I'm living inside a song. An oldie-but-goody. One that's been sung for as long as anyone can remember and still it has the power to make people everywhere sing along... or let loose and dance. Have I mentioned that I love where I live?

One of the most magical moments in my neighborhood is when the Roots of Music band kicks into gear over in the old Lutheran school yard on the corner of Franklin and Burgundy Streets. The sound of a New Orleans brass band is a force that makes you want to move towards it and then, when it is all around you, it makes you feel like you are all the way there. Parades, in my neighborhood, happen when you least expect them, turning a regular day or street into a celebration. Like those freight trains or the occasional horse drawn carriage, parades have license to just stop you in your tracks and force you to forget for a while where you thought you were going. Around Mardi Gras time, you can forget about going anywhere. The brass band in New Orleans is like the living, traveling spirit of the city, mischievous, mysterious and full of irreverent joy.

Of course, parades don't actually happen by magic. A rock-solid New Orleans brass band is a product of sustained dedication and effort by a whole community. When you watch Roots practice (should you give in to your body's desire and go run and find them) you can see determination and pride shining out from their faces along with the sweat they've worked up, running drills under a blazing sun. It is a serious business, carrying the mantle of the New Orleans brass band into the twenty-first century, and the instructors at Roots don't baby those kids. Practice on most days looks more like boot camp than band camp, with a serious and unrelenting discipline. But underneath you can catch a glimpse of the golden shimmer of purpose and prowess being ignited within young hearts.

Roots of Music is an after-school music program which busses in a hundred underprivileged kids, ages 9-14, from forty schools all over the city, five days a week. During crucial formative years, Roots students not only learn to speak the language of music and become purveyors of their own rich culture but are supported in their academic studies, with daily homework tutoring, and in their bodies, with a daily balanced meal. It's a program which nurtures its students holistically, body, mind, and spirit and amazingly, it does so entirely free of charge. When regular school lets out for the summer, Roots' summer program begins.

I know all this because I have been on the board of Roots for twelve years now, pretty much since the program's inception. Its founder, Derrick Tabb, longtime snare drummer for the internationally renowned Rebirth Brass Band, is a friend of mine. Derrick started the program in the aftermath of Katrina to give kids in New Orleans a place to go while the world around them slowly recovered and rebuilt itself. Since its humble beginnings, Roots has grown and grown and the students have played for presidents, they've played at the Rose Bowl in California and Jazz Festivals in Europe. Alumni have gone on to scholarships at universities and the Berklee College of Music. The track record of Roots is now well proven and the demand for a slot in the program is intense. All the students must meet strict conduct and attendance expectations, as well as keep their grade point average up if they want to retain their place. With more resources, Roots could easily double the size of its student body.

In this world of ongoing oppression and strife, it gives you an amazing feeling to contribute, even in a small way, to something so uplifting and all-the-way good as the Roots of Music. That must be the reason why half the people on the Roots board have been there, just like me, since the beginning. And it must have something to do with the fact that all the staff at Roots seem to live and breathe their jobs and their dedication to the music and to those kids, even when they’re sleeping. It must have something to do with why the students work as hard as they do and why family members move mountains to rally around them. The more you know about the culture of the marching band and its torch bearers, the more you respect it. 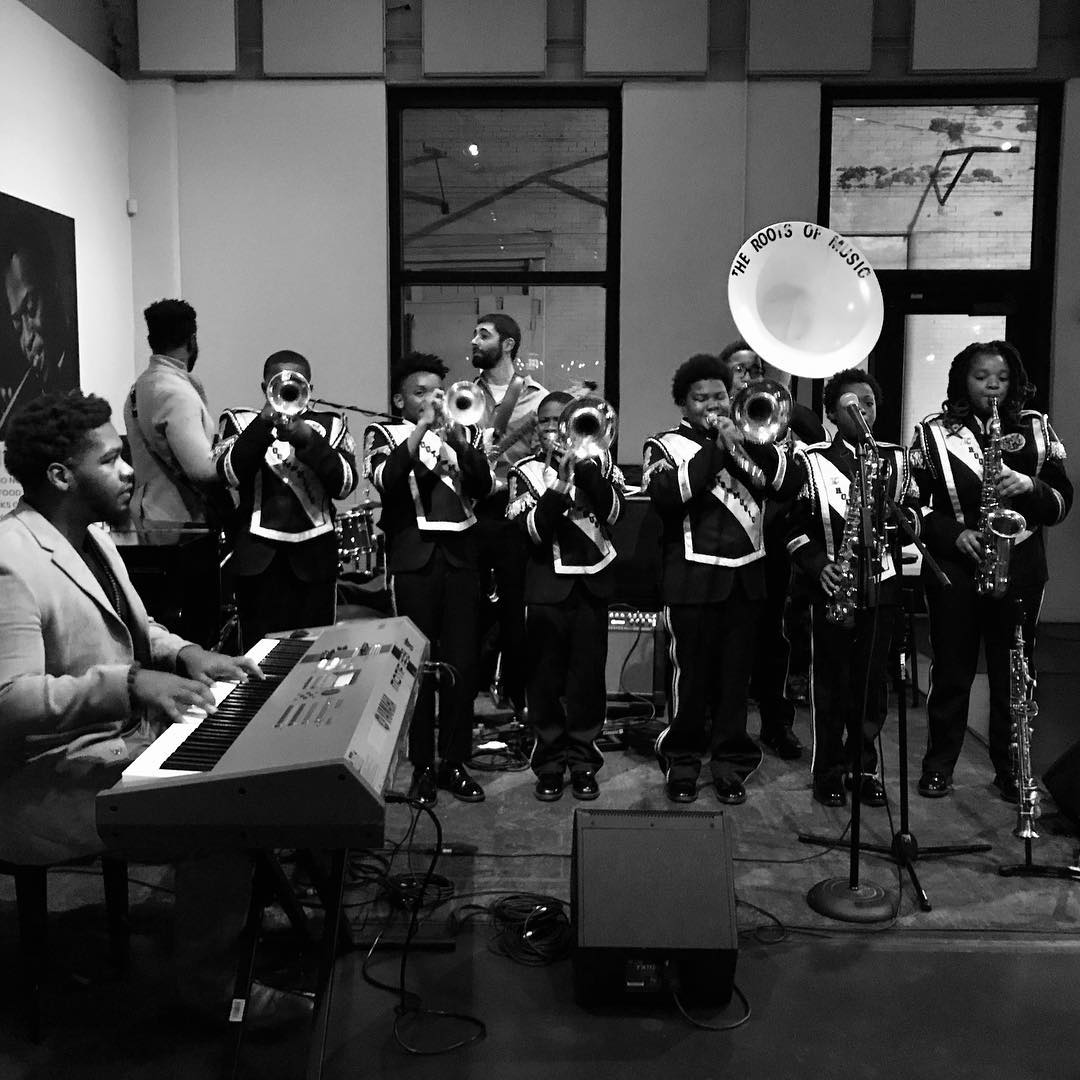 I think the success of Roots is also due to the fact that, like the city of New Orleans itself, there is a level of authenticity and soul at its core that is undeniable. The music teachers at Roots are celebrated artists and performers in their own right and the school is deeply integrated into the community and culture from which it springs. It gets its power from cultural traditions being handed down directly, not preserved from above or interpreted from the outside. In other words, Roots is all the way real and I think that's how it has survived against all odds. The monthly $10,000 bill for the busses alone is enough to keep us fundraisers in an ongoing panic but boy, does the program work. Not only for the young people who are lucky enough to become a part of its indelible and loving community, but reflexively back for the city which spawned it. Roots is feeding new life and new juice into that bubbling underground wellspring, the one that keeps the tourists coming back. Roots is helping keep the cultural traditions intact which benefit the whole city not just spiritually but financially. Tourism is the mother tree of the New Orleans economy and I thank goddess there are still people out there watering the Roots!

Music is (to take one more moment to state the obvious here) an international language, one which has the power to unite all the world's people and expresses our common humanity. For some of us, music also becomes the passport by which we are able to travel the world and connect ourselves in real time. I know this intimately through the mirror of my own life and I cherish passing on this gift to young people - especially young people with all the odds stacked against them. Music is, if nothing else, the medicine which heals us, the key which frees us, the food which sustains. That is a story as old as humanity itself and it is certainly one worth telling, for ourselves and for the future of all of our children.

Ani DiFranco is a singer/songwriter who has released more than 20 albums through her own record label, Righteous Babe. Drawing influences from folk rock, alternative rock, punk, funk, hip-hop, and jazz, her songs have been described as both autobiographical and political. Through the Righteous Babe Foundation, DiFranco has backed several cultural and political organizations. DiFranco released a memoir titled No Walls and the Recurring Dream on May 7, 2019.