May 2020 Music Student of the Month 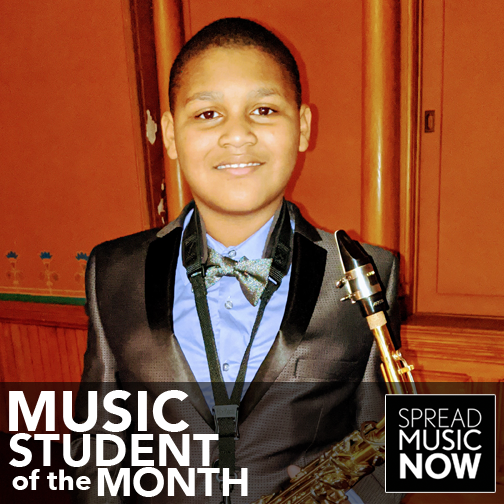 Gregory Vince McNair Jr. is a ten-year-old student at Achievement First Summit Middle School in Hartford, CT. Gregory is a talented saxophone player, a drummer, a football lover, and he dreams of being a mechanical engineer (though he would also love to be a food critic).

Gregory currently plays saxophone with the Funky Dawgz Community Brass Band at Charter Oak Cultural Center. He started playing drums in second grade, and said he immediately fell in love with music. “I’m so good at catching drum beats. I learned a beat in less than an hour!” Since then, Gregory has also tried to learn the trumpet, the harmonica, and, “I even tried to learn the accordion on my own. It didn’t go so well.”

Gregory explained that his mother is a passionate musician, and that she was the one who inspired him to try the saxophone. “I saw my mom pull out a video of a kid playing saxophone. He was even younger than me, and that inspired me to play.” One of Gregory’s favorite musical memories is playing percussion in a huge marching band concert. Gregory said: “I remember going to a concert at a baseball stadium, at Dunkin Park. I was playing on the field, drumming. I was on the tambourine. It was really exciting. I think I could hear my mom yelling in the distance!”

In addition to music, Gregory also loves playing football. He says he enjoys football the most of any sport because: “I get to get physical for a reason.” He says that even though his team didn’t have the best performance in his most recent season, what really matters is how hard he tried. “The way I see it, even though we lost, we still got a medal. That’s how I saw it. We still got a medal, because I felt like I tried my hardest.”

Though Gregory said his absolute favorite subject in school is “Lunch!” (especially when beef patties are on the menu) he also enjoys math. Gregory said, “Even though it pains me to say this, I kind of like math. Even though it’s first thing in the morning.” He explained, “I just feel like it’s easier than any other subject, because you’re solving a problem right away, instead of having to read all this stuff, and more stuff, and jot it down, and write paragraphs. Math isn’t a break. Math is more like, get started up for the pain. Get ready to take a hit!”

Gregory said that when he grows up he would either like to be a food critic or a mechanical engineer. He would enjoy being a food critic because: “It’s one of the easiest jobs I can think of. Pizza restaurants and five-star restaurants. Maybe going to Paris, because you can travel. You’re traveling, tasting food, and rating it.” When Gregory critiques food now, he doesn’t spare his own cooking. “I did make this fish, I felt like it was dry. A little dry,” he said. “And one time I made the softest cookies. But after that I just lost that charm. Next time I put it on what it suggested, and after that, the bottom was so black! It was like, no light can escape!”

Gregory would also love to work as a mechanical engineer so he could design the world’s fastest cars.

“Maybe I can make the fastest car in the world, above the Agera, which is like one of the fastest cars in the world now. Although they made this new car called the Jesko, it’s faster than the other one, it goes like 400 miles per hour!” When describing his design ideas for his own cars, Gregory said, “It would be sharp, but at the same time, kind of bubbly. Putting together a sports car look, and giving it colors like yellow, maybe red. Or another good choice is probably the most simple: gray, simple silver.”

Whether he becomes a food critic or an engineer, Gregory is sure he wants to continue playing music, and no matter what, “I want to go to Dubai and see a Ferrari!”