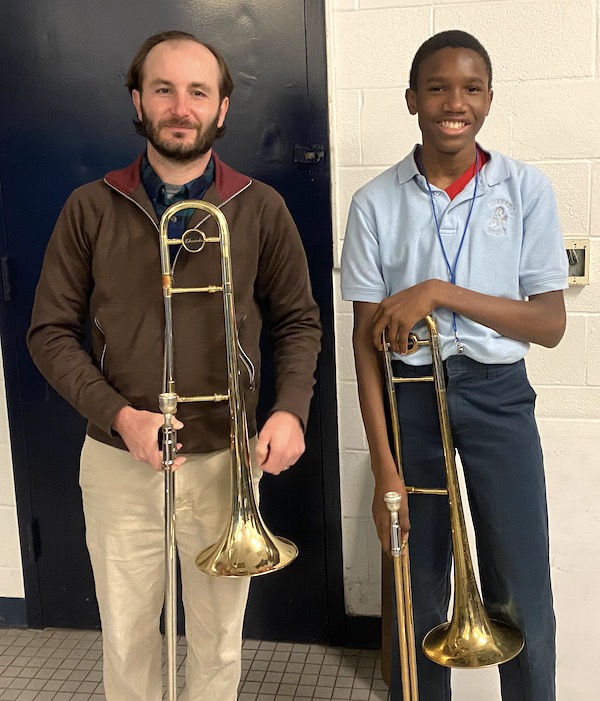 This is Jeremy Williams’ fourteenth year teaching band. He is the band director of the Marrero Middle School Mustang Band in Marrero, Louisiana.

Williams has been playing music for the last thirty years. He started playing at the young age of seven when the trombone was bigger than him. Williams grew up in a family surrounded by music. His father played the trombone, which in turn inspired his brother to start playing, and then when Williams came along, he saw everyone having fun playing music, so he had to join in too.

“When you grow up in an environment where you see people playing music and having fun doing it, playing an instrument quickly becomes a necessity of life, it quickly becomes part of your culture, which is easy to happen in a place like New Orleans,” said Williams.

Williams considers himself to be blessed, not because his family was rich, but because his parents worked hard. Both of his parents made many sacrifices for him and his brother, working long hours each week so they could have whatever they needed. Because of their hard work he was able to access resources to help his musical knowledge flourish. Williams recognizes that many young people today are not in the same position to receive high-quality music education.

“The lack of funding and overall support for music education in general seems to be very common,” said Williams. “This lack of funding is rather ironic because leaders are constantly looking for the golden answer to help the learning curve of young minds. Music Education is that golden answer, and it has been proven to help in so many ways, but it is as if decision-makers are blind to this scientific discovery. It has been proven time and time again that music education improves cognitive skills, language skills, test scores, self-esteem, math skills, creativity, stress relief, brain development, the list could go on and on forever.” 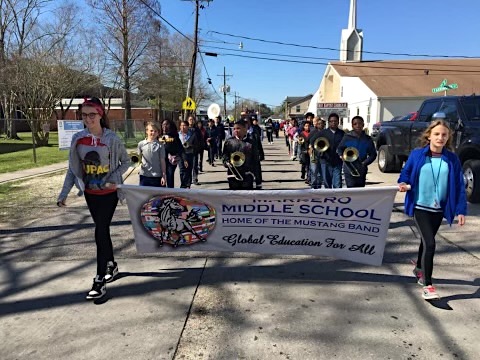 Despite the revelations of the benefits of music education, it’s still rare for some music educators to receive strong support. That’s one of the many reasons why Williams was excited to discover Preservation Hall Lessons. For years the Preservation Hall Foundation has been participating in an old, cherished New Orleans tradition of passing down music and musical culture from elders in the community to the next generation, but they’ve recently evolved to offer free online lesson plans.

Williams was impressed that, while the musical world was restricted and often not able to play together, Preservation Hall Foundation created an archive of online resources for all k-12 teachers. “The mission statement and goal of the Preservation Hall Foundation is the same goal as mine as a music educator,” said Williams. “Keep the music alive, help to protect, preserve and perpetuate the culturally rich indigenous musical traditions of New Orleans so it can be passed on for generations to come.”

When he’s not working on new lesson plans, most of Williams’ time is spent teaching band members in the classroom or giving private lessons.

Music seeps into every aspect of his home life as well, and he enjoys sharing musical traditions with his family. His stepson has chosen to continue to play even after high school because he realized that playing music is one of the few things you can take with you throughout your life. Williams has also introduced his nephew to the trombone. “Keeping the musical culture alive in the family is very important to me,” said Williams. “Culture is what defines us all as individuals. As human beings, we are all so similar in nature, but cultural differences are what give the world variety. Things like music are what help define who we are and where we come from.” 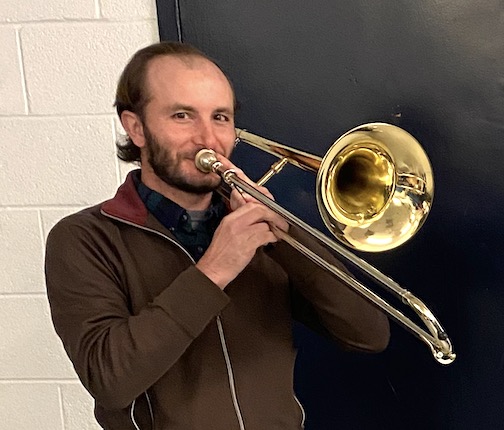 When asked what his favorite music to play is, he said, “In the famous words of Miles Davis: Good music is good no matter what kind of music it is. I say, if the music is good, I love it.”

Williams plans to continue to develop his program to the highest level possible. He feels that when bands are able to play together on a regular basis again there will be plenty to clean up, learn, and re-learn. He went on to explain that the effects of this pandemic will be felt in the music education world for years to come. This is why it is important to honor those who have used their resources to help support music education.

“Make no mistake, when you hear me talk of music and the benefits of music education, I speak of it almost as if it were a spiritual experience taking over everyone and everything,” said Williams. “Every time you enter the room to go and play your horn it is like entering a musical sanctuary. As you prepare to play, as I tell my students: Let the magic begin.”