July Music Student of the Month 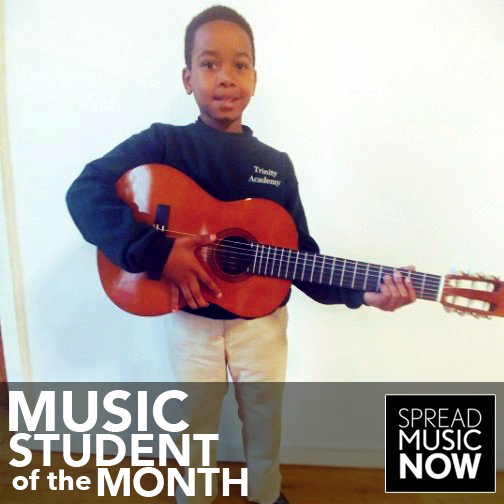 Marcuz Iloeje is a 10-year-old student at Trinity Academy in Hartford, Connecticut. In addition to being an accomplished guitar student at Charter Oak Cultural Center, he's also a pianist, a geography expert, a comic book author, and a soccer star.

Marcuz plays both guitar and keyboard, and he enjoys practicing all the songs he learns at Charter Oak. Some of his favorites this year are "Twinkle, Twinkle, Little Star," "Peter Gunn," and the theme song from "Spongebob Squarepants." But he explained that his absolute favorite is "Camptown Races" because "It makes me want to dance!"

Social Studies and Science are his favorite subjects in school. He knows the names of every single country in the world, and as if that isn't impressive enough, can also list their populations, their main exports, and, "I know most of the capitals!" Marcuz also recently enjoyed the Trinity Academy Science Fair, where: "We did a rocket that can fly. It was just made of 2 bottles [and it was powered by] a little bit of diet coke and mentos."

Working hard in school is important, but Marcuz also leaves time for play and creativity. He is the top soccer player at his school, where he likes, "Playing at recess." He likes all the cartoons on Cartoon Network and Nickelodeon and especially enjoys Teen Titans Go. He also loves superheroes and comic books. Thor is his favorite superhero, although he is also a big fan of Captain Underpants.

Marcuz is also an excellent writer, and loves telling stories and making comics about what he's learned in school. Marcuz says, modestly, "I have a few books that I wrote." He's written his own version of the superhero Shazam, and, "I wrote a book imagining I was in outer space."

He isn't sure what he wants to be when he grows up, though he has thought about becoming a veterinarian. He loves animals, and when asked to pick a favorite, said, "I like most of them!" And Marcuz doesn't just love the cuddliest creatures. As he explained, "I love lizards. I know a lot of facts about them. Most lizards eat bugs. Some of them have different colors. I remember at my old school I saw a chameleon, and it changed! It turned brown."

Not only is Marcuz a great student, but he is also an excellent teacher, and shares much of what he learns with his little sister, Portia. He says, "I teach her how to draw, even though sometimes she doesn't want to draw." Marcuz also shares his favorite guitar songs with her, passing on the music he enjoys the most.

You're an inspiration to us all, Marcuz!