From The Music Industry to Music Philanthropy 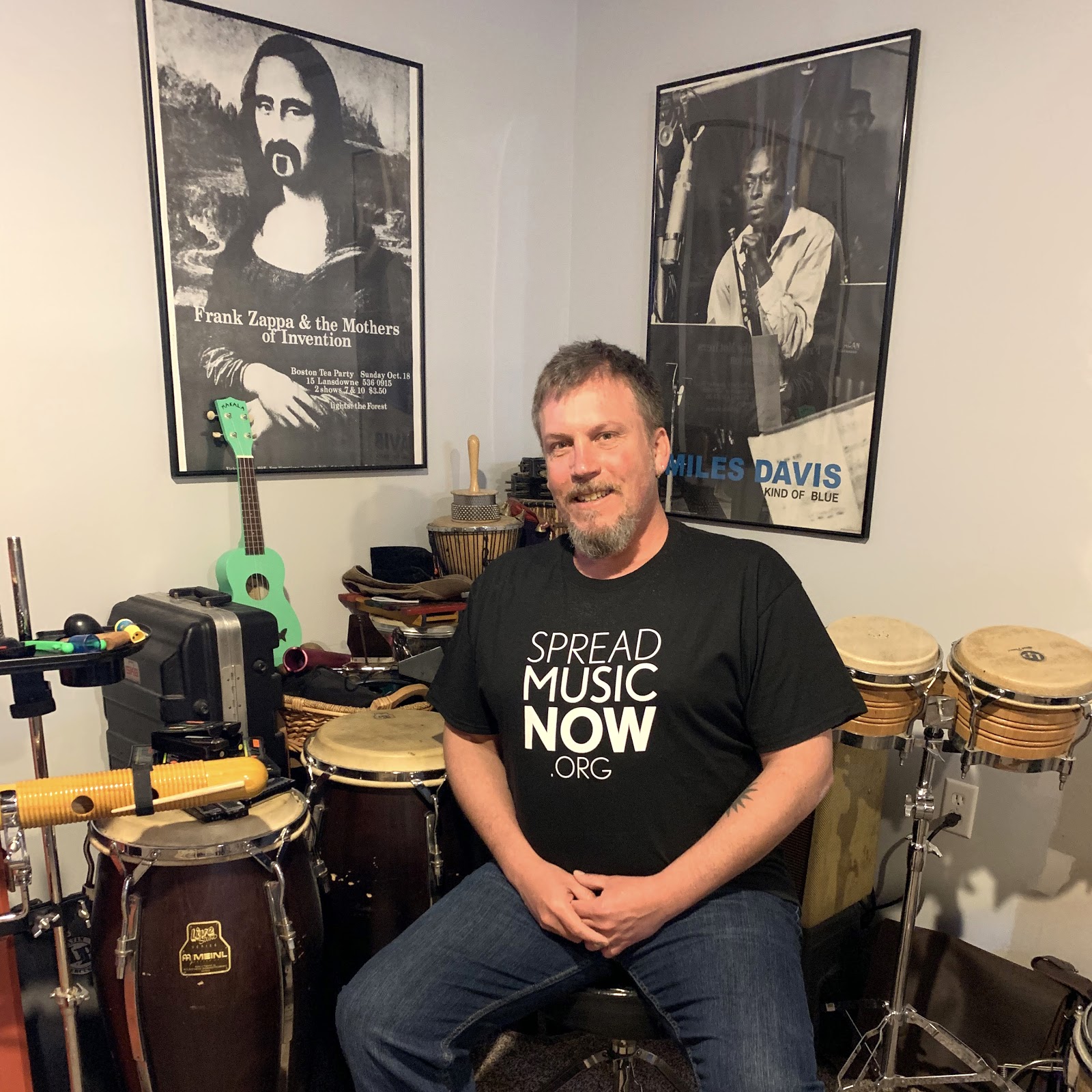 Taking the reins as Executive Director of SpreadMusicNow is no small task. The job calls for someone who understands the power of music education, has a passion for philanthropy, and can bring diverse groups together towards a common cause. But to hear Tom say it, his arrival at SpreadMusicNow was simply the natural culmination of his life's work: "I got into the music business to do good," he says, "and I've made life and career choices that reflect that orientation."

Baggott, a Connecticut native who now makes his home in Colchester, Vermont with his wife and two teenage daughters, has always followed a certain inner compass. From an early age, he took an interest in politics and philosophy, and after writing for his high school and local papers, was drawn to the University of Vermont (UVM), where he worked with the alternative student newspaper, The Gadfly, and various peace and justice and environmental groups.

But it was his near-obsessive love of music, combined with a passion for activism and community organizing, that lead Tom to his calling. As member of local bands, he had access to Burlington’s vibrant music scene, and in partnership with local non-profit organizations promoted concerts to raise money and awareness for the causes he supported. The concerts featured local talent as well as national artists ranging from Public Enemy to Blues Traveler to The Wailers. It was his regular lobbying of local heavyweight Phish, though, that would change his life. Having penned the first article to appear in their press kit, Baggott was engaged in the band’s grassroots promotion and organized their now legendary bus trip from Burlington to Boston. And when Phish’s management began planning the Waterwheel Foundation, the band’s in-house, non-profit organization, they brought him into the initial discussion. “I think they were tired of me asking them to do benefits,” says Baggott, with a laugh. “What they did, though, is remarkable, and it inspired the creation of The Mockingbird Foundation, a grassroots foundation doing great work in the community.”

Following a graduate teaching fellowship at UVM, Tom took what was then just a part-time interest in the music industry and built his first booking agency, Major Tom Productions (MTP), in October of 1995. And although MTP thrived, leading him to Atlanta and Boulder, CO, Tom found his Vermont roots calling, and returned there to work as an agent at Skyline Artists, where he represented legends such as Roger McGuinn, John Sebastian, Solomon Burke, Tom Rush and Johnny Winter.

Yet despite the thrill of representing storied musicians, Baggott missed the excitement of nurturing fresh, young talent. And it was this desire to discover and to guide that lead him to create Hoplite Music as a place where he could apply his no-nonsense approach to business in the dynamic, post-Napster, digital age, and advocate passionately for his artists, with a strategic, holistic vision of sustainable career development.

It's this sense of stewardship that Tom now brings to SpreadMusicNow, where he envisions himself as more of a farmer than the "hunter" typically associated with the music business. "I've always wanted to do good work in a tough industry. Now, I'm taking that experience and those relationships to this amazing organization. Today," he says, "my job is to help kids."

In his role as Executive Director, Tom plans to focus on three areas:

The first will be to place an emphasis on musicians – especially on emerging artists – as catalysts to drive funding and awareness of the importance of music education. By equipping these musicians with tools and resources to do good, Baggott feels they'll be an integral part of SpreadMusicNow's mission.

Next, he looks to broaden the SpreadMusicNow audience and brand, and deliver a message of empowerment through music education. "Music truly does empower; it gives life, it gives meaning – it's truly transformative. And it can inspire those who've been underserved to achieve beyond their circumstances. And that's what we're looking to do at SpreadMusicNow – empower children from a young age to embrace their potential, then help them pursue further engagement with music performance and education."

Lastly, he seeks to expand the awareness of SpreadMusicNow's accomplishments, ongoing efforts and new initiatives - through digital and traditional means - but also through the live music community: "I have been throwing concerts to raise awareness and money for worthy causes since 1987, and in today's 'tickets and t-shirts' music business, live music is an even more powerful tool for bringing people together. Live shows will be an integral part of the SpreadMusicNow mission."

Baggott's decades of management and philanthropic experience bode well for his new position. Others seem to agree. "Tom was the ideal fit for this role. His career at the nexus of business, art and culture, as a writer, performer, educator, and artist agent and manager provides him with a unique perspective on the music industry, an understanding of sustainable relationships and a broad skill set," says SpreadMusicNow Co-Founder and Board Member Richard Wenning.

And so now, having carefully put his music business to bed and turned out the lights, Tom looks forward to this next step in his career odyssey. "I feel like I've been preparing for this role for 25 years, like I'm coming full circle, back to what inspired me to be in the music business in the first place. Using my music business experience to raise money for music education? I really couldn't ask for more and I am excited to make a difference in kids' lives."