March Music Student of the Month 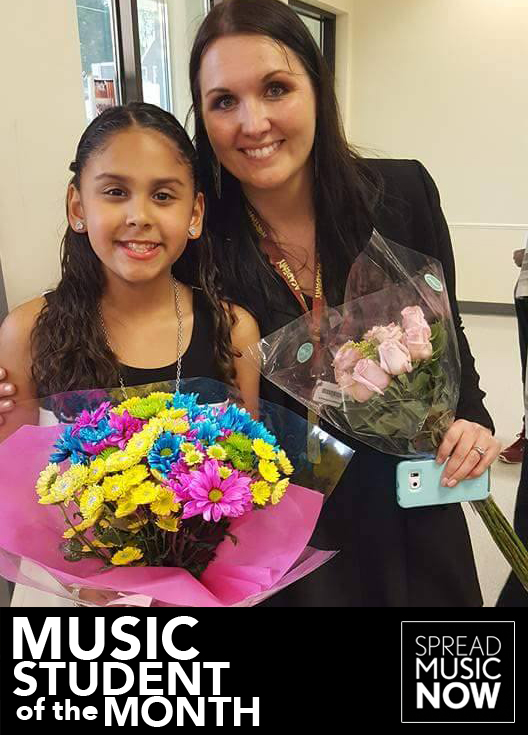 A Big Congratulations to Ianna Rodriguez of Philadelphia, PA for being SpreadMusicNow's March Music Student of the Month! She was nominated by her teacher, Courtney Noah.

Ianna is a 5th grader at Northwood Academy Charter School in inner city Philadelphia. She has been the lead in 3 school plays including Annie in Annie Jr., Baloo in the Jungle Book, and Kelsi in High School Musical 2. Ianna has even been in an outside theater production of The Music Man.

Ianna has played the violin for 4 years and has been a member of the elite bell ensemble for 3 years, playing the music of Led Zeppelin, Nirvana, Radiohead, and other classics. As a talented singer, violinist and bell player, Ianna goes above and beyond in all she does. Ianna is someone the whole school looks up to. She is kind, a student leader and stands up for those who are less fortunate.

Ianna's father, Cesar, had this to say to his daughter:

You are making my dreams come true in your life. When I was a young boy I wanted to do music for everyone to hear. I have accomplished a lot in music but never started as young as you have. It's an honor and a privilege to be your father. I'll never forget what you said to me when you were 5 years of age. You said you wanted to be a rock star like me. In laughter I said, if you do it like me I'm not doing my job as a father. You have to do it better than what I have. So far, you're on your way. Congratulations on being Music Student of the Month for March. I Love You and forever you are going to be the inspiration for my music. Much Love and Respect, My Daughter!!!